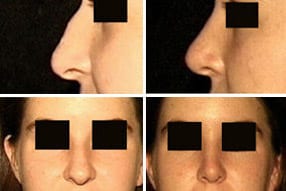 Many people have concerns about the size or shape of their nose. Characteristics of the nose are genetically inherited and generally continue to develop until the age of 16. Rhinoplasty, sometimes referred to as a “nose job,” is a surgical procedure that can increase or decrease the size and change the shape of the nose. Changes can be made to the tip, bridge, nostrils, and the angle of the nose in relation to the upper lip. Nose surgery can also serve to correct breathing difficulties. In order to make these changes to the nose, there are several surgical techniques available at my Mesa, Arizona, practice.

Some patients may be candidates for non-surgical rhinoplasty if they wish to make minor changes to their nose such as correcting asymmetry, broadening an area, or slightly lifting the tip of the nose. Non-surgical rhinoplasty involves injectables, such as Radiesse or Juvederm. The procedure only takes about 15 minutes, and there is little to no recovery time involved. There may be some risk with injecting the tip of the nose, however, as too much product can cause a disruption in blood flow and lead to necrosis.

An open rhinoplasty is performed with a small incision made in the columella (the skin that divides the nostrils). The skin is pulled back so the surgeon can easily see and access the cartilage and bone. This technique is often thought to be more accurate, especially during revision procedures. Scars with this procedure are practically undetectable and usually fade with time.

A closed rhinoplasty involves small incisions inside the nose only, and the surgeon works beneath the skin to alter the framework of the nose. This technique provides a shorter recovery period and no visible scarring.

The technique used for your surgery will be determined by several factors, including whether or not this is your first rhinoplasty, whether grafts and implants will be used, and the effects of any trauma you may have experienced to the nose or face.

Reduction rhinoplasty is the most popular technique for nose jobs. The bone and cartilage is reconstructed through incisions made inside the nostrils, and the skin is usually left untouched. The bridge of the nose can be narrowed and straightened by surgically scraping the bone on the ridge. The nasal bones that join with the cheekbones can be cut and then brought closer together to make a narrower nasal frame. The tip of the nose can also be shortened by removing some of the excess cartilage at the tip.

Augmentation rhinoplasty usually involves increasing the size of the nasal bridge or tip. Many patients of Asian descent request this procedure. If this is the patient’s first rhinoplasty procedure, bone or cartilage can be moved from other areas of the nose or body in order to augment the nose. If there is not enough natural tissue for use, the surgeon can use synthetic, or “alloplastic,” materials, which are manufactured for soft tissue augmentation. These products can be made of silicone, expanded polytetrafluoroethylene, polymethylmethacrylate, or calcium hydroxlapatite.

A septoplasty can be performed if breathing through the nose is difficult as a result of injury or heredity. The nasal septum, which divides the airway and nostrils in half, can be adjusted to open the airway. This can be performed at the same time as a cosmetic rhinoplasty procedure if necessary.

When the appearance of a patient’s nose is influenced by the chin and cheek bones, the surgeon will sometimes advise another procedure to be combined with the rhinoplasty either at the same time or during a subsequent operation. A chin or cheek augmentation can bring a more harmonious look to the face and enhance the patient’s overall appearance. For more information or to schedule a consultation, call my Mesa, Arizona office at (480) 844-1410.

How can we Help?

Please fill out the form below and we will contact you as soon as possible.